Posted by Contrariwise at 9:15 PM 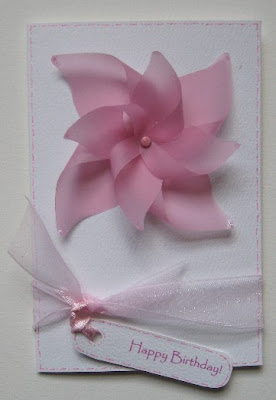 I found this great site called Crafty thoughts from Crafts forum Members which has tons of tutorials. One that I thought was really cute and really great for the spring is a card with a pinwheel on it. It's perfect whether or not March comes in like a lion or goes out like a lamb. The tutorial seems like a lot of fun.


A couple of years ago, I asked for an iPod for my birthday. All 3 of my kids already had one and I felt a little envious. I love electronics and thought that an iPod would be fun to play with. My husband bought me on of the more expensive models - I was tempted to return it because of the cost. But I'm so glad I didn't, because I use it all the time. I travel a lot and I take it with me everywhere. I even installed an iPod adapter in my Mini Cooper so that I can play on the way to work. I really never expected how much pleasure it would give me!

The one thing I really should have done is bought a protective cover for it. But I thought that that was a bit silly : buying things for my things. Can you believe it! But the iPod does tend to scratch.

So when I saw this tutorial for a nano, I thought it would be a great thing to make. (Pity I don't sew!)

You got to admit it's adorable!

We all accept that movies stretch the truth in the interest of building drama. The following ten flicks, however, treat the truth like it was Silly Putty -- pulling and twisting it until it's unrecognizable.

10,000 B.C.Director Roland Emmerich is usually a stickler for realism (see: sending a computer virus via Macintosh to aliens in Independence Day). So we hate to inform him that woolly mammoths were not, in fact, used to build pyramids. Heck, woolly mammoths weren't even found in the desert. They wouldn't need to be woolly if that were the case. And there weren't any pyramids in Egypt until 2,500 B.C or so. Movie Info   Trailers & Clips   Production Photos

GladiatorEmperor Commodus was not the sniveling sister-obsessed creep portrayed in the movie. A violent alcoholic, sure, but not so whiny. He ruled ably for over a decade rather than ineptly for a couple months. He also didn't kill his father, Marcus Aurelius, who actually died of chickenpox. And instead of being killed in the gladiatorial arena, he was murdered in his bathtub. Movie Info   Trailers & Clips   Production Photos

300Though this paean to ancient moral codes and modern physical training is based on the real Battle of Thermopylae, the film takes many stylistic liberties. The most obvious one being Persian king Xerxes was not an 8-foot-tall Cirque du Soleil reject. The Spartan council was made up of men over the age of 60, with no one as young as Theron (played by 37-year-old Dominic West). And the warriors of Sparta went into battle wearing bronze armor, not just leather Speedos. Movie Info   Trailers & Clips   Production Photos

The Japanese in the late 19th century did hire foreign advisers to modernize their army, but they were mostly French, not American. And they certainly were not Scientologists. (ARGHHHH!) Ken Watanabe's character was based on the real Saigo Takamori who committed ritual suicide, or "seppuku," in defeat rather than in a volley of Gatling gun fire. Also, it's doubtful that a 40-something alcoholic Civil War vet, even one with great hair, would master the chopsticks much less the samurai sword. Movie Info   Trailers & Clips   Production Photos

ApocalyptoThis one movie has given entire Anthropology departments migraines. Sure the Maya did have the odd human sacrifice but not to Kulkulkan, the Sun God, and only high-ranking captives taken in battle were killed. Yes the movie was entertaining, but when have you ever seen a complete solar eclipse that lasts for approximately 2 minutes - the time it takes to save the protagonist. Sigh. Movie Info   Trailers & Clips   Production Photos

Memoirs of a Geisha The movie wasn't nearly as good as the book, and the book was just OK.

The geisha coming-of-age, called "mizuage," was really more of a makeover, where she changed her hairstyle and clothes. It didn't involve her getting... intimate with a client. In the climactic scene where Sayuri wows Gion patrons with her dancing prowess, her routine - which involves some platform shoes, fake snow, and a strobe light - seems more like a scene from Flashdance (and we all know how realistic THAT was) than anything in pre-war Kyoto. Movie Info   Trailers & Clips   Production Photos

According to the movie, Wallace's blue-eyed charm at the Battle of Falkirk was so overpowering, he seduced King Edward II's wife, Isabella of France, and the result of their affair was Edward III. But according to the history books, Isabella was three years old at the time of Falkirk, and Edward III was born seven years after Wallace died.

Who cares, though. We got to see Mel Gibson, in his prime, in a kilt. Movie Info   Production Photos

In 1585, when the movie takes place, Queen Elizabeth was 52 years old - Cate Blanchett was 36 when she shot the film - and was not being courted by suitors like Ivan the Terrible (who was dead by then). And though the movie has her rallying the troops at Tilbury astride a white steed in full armor with a sword, in fact she rode side saddle, carrying a baton. She was more of a regal majorette than Joan of Arc.

Revolutionary War figure Francis "The Swamp Fox" Marion was the basis for Mel Gibson's character, but he wasn't the forward-thinking family man they show in the flick. He was a slave owner who didn't get married (to his cousin) until after the war was over. Historians also say that he actively persecuted and murdered native Cherokees. Plus, the thrilling Battle of Guilford Court House where he vanquishes his British nemesis? In reality, the Americans lost that one.

Oh well, at least Mel Gibson was easy on the eyes. Again.

According to this film, in year 2001 we would have had manned voyages to Jupiter, a battle of wits with a sentient computer, and a quantum leap in human evolution. Instead we got the Mir Space Station falling from the sky, Windows XP, and Freddy Got Fingered. Apparently the lesson here is that sometimes it's better when the movies get the facts all wrong.