Things that amuse me: steampunk

Posted by Contrariwise at 2:59 PM

First, if you're not familiar with steampunk, it's like an alternate history: what would our world be like if we still used steampower to drive our inventions and if everything was still handcrafted instead of being mass-produced? Sort of like a combination of sci-fi, goth, and geekery.

Still unsure of what it is? Think of the final scene of Back to the Future Part III : Remember Dr Emmett Brown and his family flying away in a steam-powered time-machine locamotive? That was early steampunk. Have you seen the movie The Golden Compass or it's trailers? They have some wonderful scenes of steampunkery. (Especially the airship.)

A perfect example of steampunk is the work of Jake von Slatt (not his real name) who is quickly becoming something of an icon on the scene. He's probably best known for his computer mods, namely his steampunk keyboard, and most recently, his steampunk monitor: 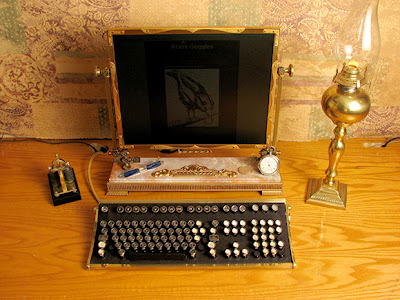 
There are a few crafters on etsy that have some steampunk-inspired creations. moon23 (http://www.moon23.etsy.com/) has got some really awesome handcrafted journals: 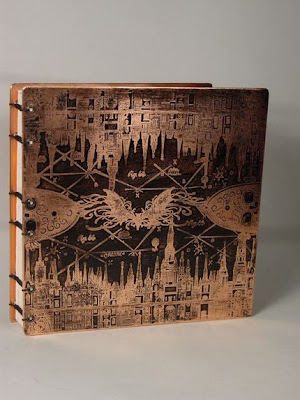 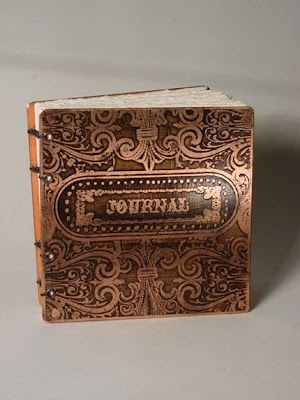 All handmade- he even cuts the sheets of paper for them!
I would love to have one of these. But I'm not sure I would ever be able to bring myself to actually write in it. They're so much like little artworks that I would be afraid of defiling them! I don't think I deserve them. (And even if I did write in them, I'm sure it would be in pencil, not in ink. Nothing permanent, you know. )
Another shop, Porkshank's Dangerous Detritus (gotta love that name), creates one-of-a-kind jewelry from vintage and antique parts: 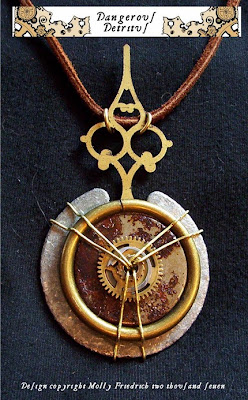 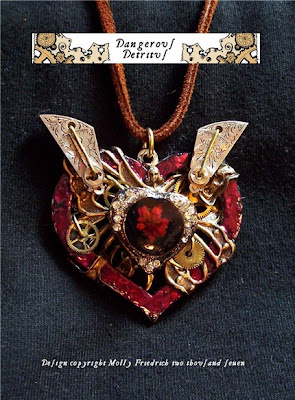 Aren't these gorgeous. Even though I probably wouldn't wear them (I would if I were only younger -*sigh*), I still admire her work and love looking at her pieces. They've definitely got a retrofuturistic flair to them. Her stuff makes me wish I could devote all my time to designing jewelry.
Her shop can be found at http://www.liquidsolution.etsy.com/