Things that amuse me: The hyperbolic caterpillar of doom

Posted by Contrariwise at 12:32 PM

This is NOT your mother's crochet. If you want to see doilies, go elsewhere.

The crocheter goes by the moniker, KnotByGranma. Knot By Gran’ma is a one woman enterprise, where she basically crochets herself silly. 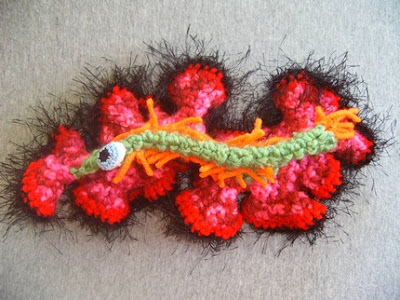 Her shop is full of random stuff. Like the Hyperbolic Caterpillar of Doom.
In Granma's own words:

"I'm not really sure how I came up with the Hyperbolic Caterpillar Of Doom, but I'm glad I did. He turned out pretty neat. He has a lot of caterpillar personality for not being able to move or eat anything. He's great at starting conversations, hanging from the wall, or quietly guarding your coffee table. He also likes to be hugged, even though his name might not make you think to hug him. His one eye will gaze at you lovingly for all time and he likes to be given as a gift too. He's totally one of a kind. " 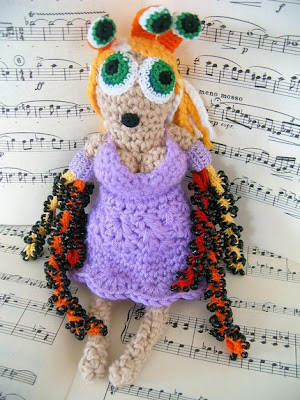 And then there's the Singing Land Siren.

"She’s lured in many a biker, weary from being on the road, riding with the wind in their hair. Her melodious voice can be heard from miles away and to each man she sounds a little different. They are entranced by her beautiful melodies and never see the end coming, while their bikes continue down the road, less the men riding them, until they crash and burn somewhere on the shoulder.Singing Land Siren is crochet out of cotton yarn and thread. "

I think the extra eyes on top of her head and the beaded tentacles are a nice touch, don't you? 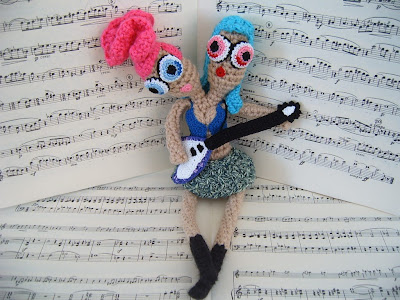 I'm not exactly sure what to say about her The Guitaresses Art Doll, (or why the title is singular).
But apparently Granma knows all about her/them/uh, it:
"Influences such as Zeppelin, Hendrix, AC/DC, and Joan Jett help spur on the creativity of these very special conjoined girls. The Guitaresses are quite the pair and they lead a fantastic life. They are your ordinary rock and roll guitar players... even with having to share a body. Each girl in The Guitaresses controls one side of their body. Their polyphonic shredded guitar riffs are legendary. They tour constantly and basically enjoy life on the road. They are pretty awesome.The Guitaresses were crocheted from acrylic yarn. Their little eyeballs, Flying V Guitar Replica, lips and top are crocheted out of cotton and then sewn on afterwards. They sport a flirty pair of white cotton panties too. [You'll have to click on the above link to see those. ] They are stuffed with new polyester filling, which is hypo-allergenic, and flame resistant. "[Because no one wants their conjoined rockers going up in flames, am I right?]
Granma used to have a Hyperbolic Hooha for sale. (Yes. That's what it was named. I kid you (k)not.) I was hoping I could post a picture of it but I don't see it in her shop anymore. Perhaps it was banned from Etsy. So, instead, I'll post a parting picture of one of her crocheted eyeball ornaments. 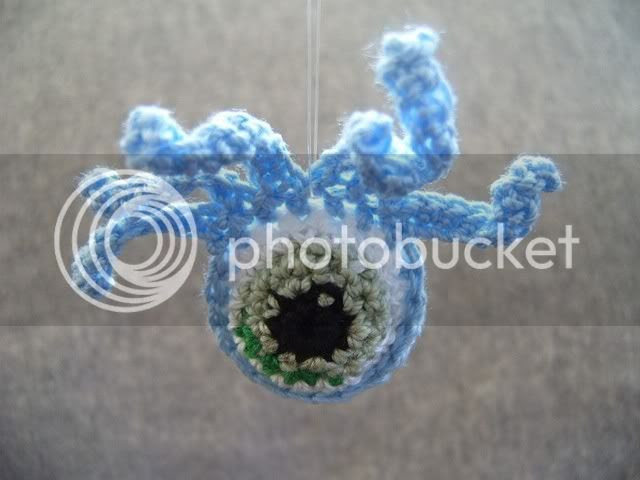 KnotbyGranma's shop can be found here.

Labels: Etsy, things that amuse me