Musing about Sweeney Todd, the demon barber of Fleet Street

Posted by Contrariwise at 1:09 PM 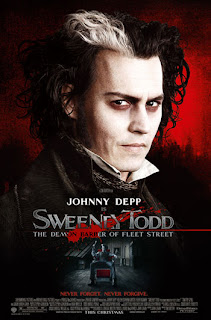 Ok, I'm sure I'm not alone in this, I just love Johhny Depp - especially in his pirate personna. He could come and sweep me off my feet and carry me off to his ship anytime.

His most recent movie is Sweeney Todd, a musical/slasher movie directed by Tim Burton. The only other person in my house that wanted to see it, or was old enough to see it, was my 20 year old son. So it was just him and me. (You may find this hard to believe, but he wasn't embarrassed by going to the movies with his mommy. At his age, I think I would have been aghast at going to an R rated movie with my mom, so I was pretty impressed with this .)

If you don't know it, the story centers on the character of Sweeney Todd, formerly known as Benjamin Barker, who returns from penal colonies in Australia, where he spent fifteen years on false charges. When he learns from Mrs Lovett, whose meat pies are the worst in London, that his wife poisoned herself after being raped by Judge Turpin (the man who wrongly imprisoned him), and that his daughter is the ward of the same Judge Turpin, he vows revenge. The two become entwined in a conspiracy that results in mass murder, booming business for Lovett's shop and, ultimately, tragedy.
Oddly, previews of the movie never showed a single person singing, so I've heard that a lot of people who went to see a slasher movie suddenly found themselves seeing Johhny Depp and Helana Bonham Carter singing away while they killed people coming through their lodgings. 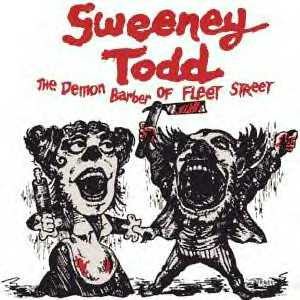 I definitely wasn't fooled because I actually went to the original Stephen Sondheim Broadway production in 1979 starring Len Carrou and Angela Lansbury. (That was one of the reasons I wanted to see the film. That and Johhny Depp, of course.)
The play was an amazing production. The set was phenomical -- a lot of the scenes were played on catwalks that extended over the audience. And the barbershop/bakery/ovens were an open 3 story structure in the middle of the stage. The victims slid from the barber chair on the top story, through the bakery, and into the basement where the oven was.
I didn' t know this until I looked it up but the New York musical played only for 577 performances. On opening night, half the audience supposedly left in disgust at intermission. And I can understand why. Most musical are fluffy fare. Not this one. When Sweeney slit his victims throats, blood actually spewed across the stage- and a couple of times I saw it hit the audience. I don't know how they did it, but you could actually see the blood steaming on the knife.
By the way, back then, I bet I paid about $25 for my orchestra seats. Can you believe that! (What's a broadway play now? $150 and up?)