Posted by Contrariwise at 10:44 PM 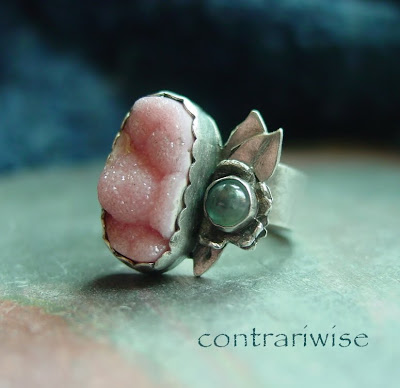 Yes, I finally finished it!  (If you check my past few posts, you can follow the progress of this ring from a few sketches, to the finished piece.)

The centerpiece of this ring is a Bazooka pink druzy of rhodochrosite . It's covered all over with a shimmer of crystals. To its right is a blue topaz which forms the center of a handcrafted flower. The flower is three dimensional - the petals curve inward toward the topaz and there are more petals underneath.

(More photos of this ring can be found here.)

So what's a druzy? It's a blanket of tiny, sparkling crystals most often found inside a geode or an agate. The sparkle looks like spilled salt or sugar. The tiny crystals are made after molten rock begins to quickly cool, trapping gasses within it as it becomes a solid. The trapped gasses make crevices and cavities in the cooling rock. Later, groundwater flows through these gaps and crevices, layering minerals which crystallize on top of each other. The crystals are druzy (or drusy). This process doesn't take days or weeks, but a few hundred or even a few thousand years.

(BTW, I got this one-of-a-kind stone at Mountain Glory Gems, a great seller on Etsy.  I haven't seen another one like it, but I've bought other lovely and unusual cabs there. ) 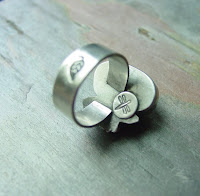 This ring offered a few challenges. The cab had uneven depths and surfaces which made it hard to set. And I forgot how much of a pain small cabs like this topaz are to set. And then, just after the stones were set and I want to add the finishing touches, I found that the chemicals I use to oxidize / antique the silver were dead. (The sudden humidity of the summer weather destroyed the Liver of Sulfur I usually use.) I thought the ring was going to have to wait until I ordered more chemicals, but then I remembered: I can oxidize silver the old-fashioned way, using egg yolks. The sulfer in egg yolks is really effective at darkening silver and enhancing the depth of the details.
(If you're interested in how to oxidize silver with egg yolks, I wrote a tutorial about it here.)