MooShu Monday: Is it time for a haircut?

Posted by Contrariwise at 11:57 PM 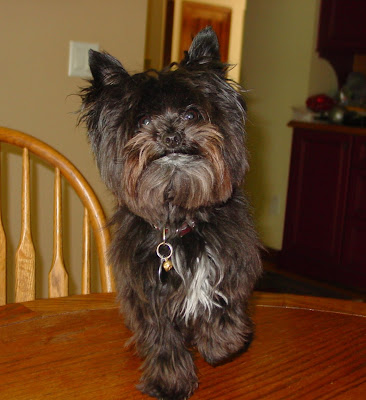 Because MooShu is such a little guy, he's very sensitive to temperatures.  During the winter he got cold so quickly.  We wanted to make sure that he didn't get chilled, so we let his hair get long during the winter months - and kept him bundled up in sweaters when it got really chilly.
This didn't mean he didn't get a trim now and then.

Because it's so inconvenient to routinely take him to the groomers, I decided that I would take the shears into my own hands.  Over the years I've trimmed the hair of my husband and son, so I thought I could do the same for MooShu.  So I bought some pet clippers and sharp scissors and kept him tidy.  Plus it was fun trying shape his hair and allow him to grow out his whiskers and a top knot.  (And look at that cute little beard!)
But now that the warmer weather's arrived, he gets hot very quickly - his fur is dark and it tends to absorb the heat.  But there's another problem: his fur is just so soft.  MooShu is a cross between a maltese and a yorkie and, rather than the silky hair of a yorkie, he's inherited the hair of a maltese.  It's so soft and fluffy that it tends to mat.  Between the heat and the knots, it seemed that a haircut was in order.
But, of course, before the haircut, comes a bath.

Why is it, no matter how casual and nonchallant I might be, he knows.

And he runs.
I chase him around the living room and, eventually, he decides that it's no use.  He cowers, shows me the underside of his belly, and I pick him up and away we go for to the kitchen sink. 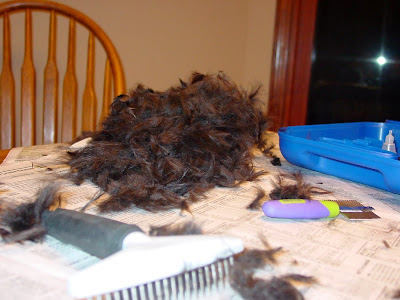 But this time, there was more than just a routine bath.  Yes, much, much more.

It takes all of our patience. And about half a cup of Cheerios, a favorite treat.

Then, after it was over, we probably had enough hair left over for another Mooshu.  Maybe even two
And now, with his hair shorn off, he looks like a little puppy again!
Although he definitely felt the entire process was an ordeal, it seems as though he's really enjoying his new haircut.  He's been running around more than ever, playing and chasing after his toys.

He's so full of joy and seems to be pleased with himself and with everything around him.  Oh, except for one thing.

After all the trauma I put him through, I'm persona non grata - he's pretty much avoided me for the past few days.

But I think it was worth it. 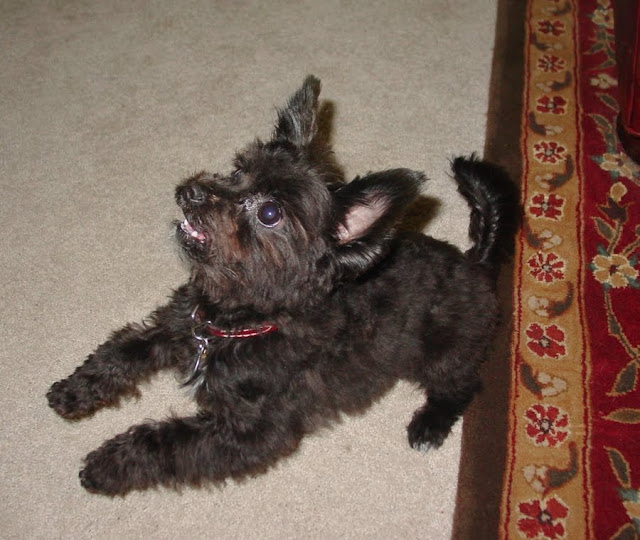