Oxidized versus shiny silver: which do you prefer?

I bought some beautiful faceted crystal quartz when I was in Rome recently. I love the way the light hits the many facets and bounces off of them.

I've used them to make some earrings, highlighting them in a herringbone weave made of sterling. (You can see them here.)

But this weekend it suddenly struck me that they would be great as the focal for rings. (Palm hits forehead! Duh!) 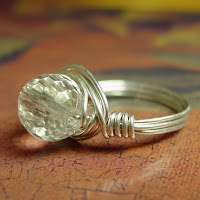 I made a wire wrap ring, with the intent to oxidize it.

I personally like the antiqued look in jewelry. When I look at photos of jewelry, I'm always drawn to those that are antiqued. The contrast between the highlights and the shadows gives the jewelry interest. But I'm not sure most people like the oxidized look. (I've also heard that a shiny silver usually sells better in shops on Etsy.)

After I finished wrapping the stone, I found I liked the way this ring looked with the bright polished silver. (There it is on the right.)

Shiny shiny shiny. The bright sterling in the same color tone as the quartz.

I could definitely see myself wearing this at Christmas decked out for the holidays - and it sparkling on my fingers. 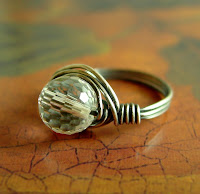 But since I really had planned to oxidize the ring, I went ahead and did it.

On the left is the exact same ring, oxidized and rubbed with fine steel wool to bring out the highlights.

Hmmm. I'm unsure. I thought the oxidized finish would contrast with and bring out the sparkling quartz. But it seems to me that the stone reflects the dark tones more. Not bad, but different than I had imagined.

What do you think? Which do you like better?