Posted by Contrariwise at 6:02 AM

The next day I called the instructor to arrange for us to come over to make the earring. (For the sake of this story, let's call the instructor, Jerry, since that happens to be his real name anyway.) That's when I learned this was going to be a 2 step process: pick out a piece of turquoise first, then come back and do the metalwork.

So I drove over to his place with the lone earring to pick out the turquoise. I thoroughly expected that Jerry had pieces of turquoise already cut, and all I would have to do was pick one out that would match.

He brought out boxes and boxes of little chunks of turquoise that he'd saved from other projects throughout the years. I rummaged through them until I found one that I thought might be the right color and about the right size for cutting to match the stone in the earring. 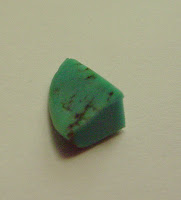 He agreed that it was an OK choice, and then set off to his basement where his lapidary equipment is.

What a treat! He had tons of equipment that I'd read about but never seen. Saws! Kilns! Casting tools! And boxes of uncut stones! I could probably spend days down there exploring!

He cut the raw chunk of turquoise on a special saw and handed me the piece you see on the left. At this stage, it was still about 4 times bigger than the stone in the earring.

I was expecting that the next step was that he would shape it and polish it to match.

Jerry brought out a couple pieces of sandpaper of different grits and and told me I would need to sand the chunk of turquoise down to the right shape. I rubbed the stone against the sandpaper - and realized it didn't make much of an effect on the stone.

Then he got out a bottle of tin oxide and a piece of leather and said that after sanding the stone down to the right size and shape, I would use this polish it.

Now you're probably thinking the same thing that I was - this would take forever!

I told him that I would work on it and get back to him when the turquoise was ready. I took all this stuff home that night and looked at the turquoise, the sandpaper, leather, and tin oxide. 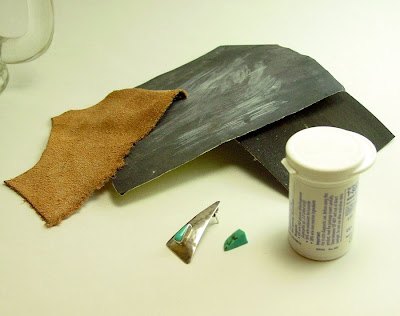 And that's when I took out my dremel.

Sandpaper? BAH! With the dremel and a grinding bit, it didn't take long to form that stone to the right size and shape. In fact, most of my time was spent hunting for the turquoise on the floor - it kept popping out of my hands and flying across the room when I was grinding it. 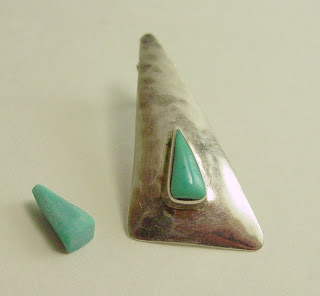 When I got the turquoise ground to the approximate size I wanted (see photo on the left), I used the sandpaper to smooth out the rough edges. The tin oxide was next. It really made the stone shiny with very little effort. In fact, it was pretty impressive!

Overall, it only took me 20 minutes to make the cabachon. Not bad.

The next day, I called Jerry and we made arrangements to meet to do the metalwork to create the matching earring.


(If you'd be interesting in subscribing to my blog and receiving it by e-mail, just click Subscribe to Contrariwise ramblings by Email.)