Posted by Contrariwise at 7:13 AM
Crafts, Tutorials....

Earwires
Last week, I posted tutorials on how to make headpins. So I thought to myself, why not post some how-to's on earwires.

You can always buy your own, but to be honest, most of the time they're pretty expensive considering the amount of materials in them. But they can also be pretty generic. I tend to make my own because 1) I'm cheap 2) They're so easy to make 3) When they coordinate your earring design, they can be pretty darn impressive.

Of the earrings I make, hardly 2 of them ever use the exact same earwire! Here are some examples from my Etsy shop.

As you can see, either the style is a bit different, or the diameter or length of the loop varies. I've used sharpies, pencils, markers, even a prescription pill bottle to make the loops. I might also hammer the earwires depending on whether I feel that style fits in the overall design (see the 3rd and 4th earrings from the left).

So I went out on the web and tried to find some really good tutorials. Well, there are a lot of them. But, to be honest with you, I didn't see very many that I liked. Either they used equipment that wasn't standard (i.e. rolling presses. I mean, who has rolling presses!) or I didn't like the final result.

In lieu of me doing my own tutorial, I put together some that I found and provide you with my opinions. 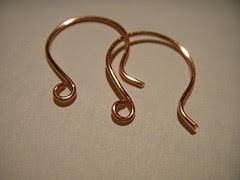 This one is quite good and it comes from Hazel & Honeysuckle. Nice basic handmade earwire using a tool everyone has: a sharpie.

Always remember to file the end of the wire that goes into the earlobe. In the tutorial , Hazel & Honeysuckle uses a wire rounder or burr cup to smooth the end of the wire.
Personally, I have a wire rounder and I find it pretty inefficient. Do you know what I like to use? A metal nail file that I bought at Meier's for 99 cents. It works, it's cheap, and if you lose it, so what. Buy another.

If you want a little more of a custom look, you can always hammer the wire a bit, like I did in earrings in the center, above.

Wig Jig has a tutorial - but you have to buy their jig and a "super peg" . (Surprise, surprise.) The earwires (see left) actually look pretty nice but they look pretty similar to the ones you can make with a sharpie - without the little "flip" at the end. The best thing about using a jig is that your earwires will have a consistant size and shape.

The good thing about making your own earwires is that you can add special touches to them, like incorporating a bead. Glitter Critter has a free tutorial in her shop on how to do that. Plus her tutorial also has instructions on how to make your own handmade earring jig. It really helps you make identical earrings yet still gives your creations that special hand crafted look. 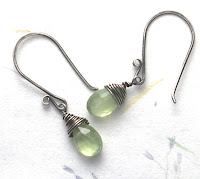 If you want to make an earwire similar to the earrings to the left, Orion Designs has a very nice tuturial posted in her blog.
She hammers the end of the wire against an anvil for a very finished look. On the right you can see a close-up of how the hammering can create a unique and custom look to your earwires. (Just be careful not to hammer the end too much. I've done that and I don't like the way it makes that end stick out from the loop.) 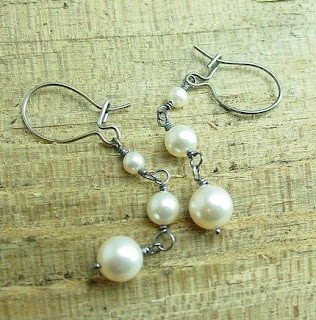 On the left is a picture of one of my earrings with French kidney wires. This type of earwire is a little harder to make - you have to be careful to measure each bend accurately and there's not jig involved -but I think they're a lot of fun. Plus you never have to worry about the earring falling out of your ear.
Here's a downloadable pdf on how to make the basic French kidney earwire. 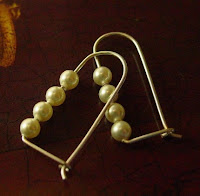 On the right is a variation of the kidney wire. I've incorporated pearls right onto the wire as part of the overall design. (I told you kidney wires could be fun!) 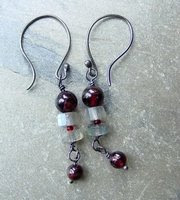 And what about the earwires that have little balls at the end of them like the ones on the left? Don’t buy them! Just take the headpins that you made from last week’s tutorials, and follow the basic earwire instructions above.

For centuries the peanut was revered for its peaceful nutritional properties and much loved by elephants. Looking back over the historical record, the only blemish on the peanut came when peanut rancher Jimmy Carter was elected president of the United States. Had Carter raised okra instead of getting rich off of peanuts, he never would have become president, and we wouldn't be in Iraq today. (It's a long story. We'll save it for another post.)

How peanuts suddenly became Public Enemy Legume No. 1 is unclear. Years ago, the millions of children who were raised on peanut butter and jelly sandwiches apparently simply "dodged the legume" forced upon them by uncaring parents.

Maybe kids suffering from "peanut envy" when they see other children enjoying a PB&J sandwich eventually will overcome their allergic reactions to the lowly legume. Or maybe a more people-friendly peanut can be invented. In the meantime, here's something that you can download and post in your school, office, or anywhere where you need to creat a nut-free zone. 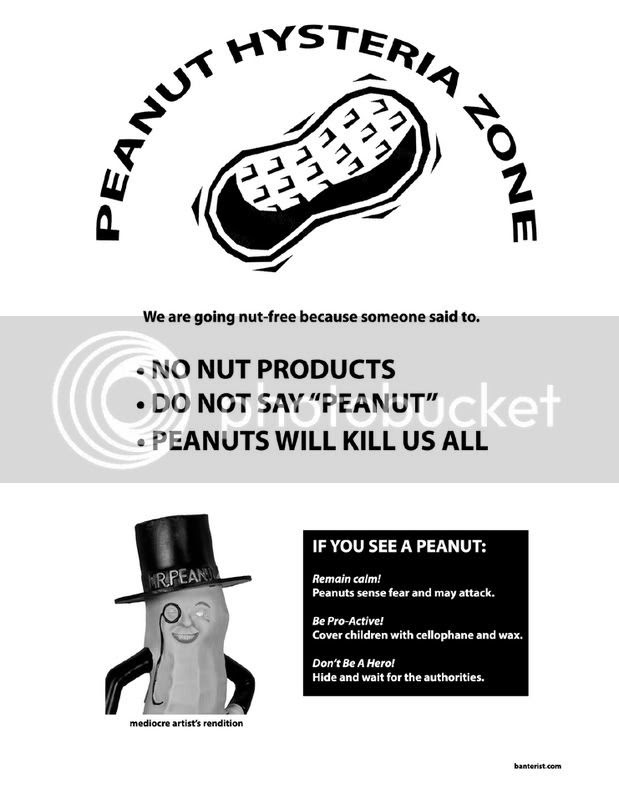 (The above poster makes me want to run out and get myself a peanut butter sandwich. Hmmm....Skippy....yum!)

What's your type? What type do you click best with, and which types spell doom? In five quick questions, you'll find out about your identity. Plus, you'll have a chance to typecast that special someone, and see if you have a future.

Here's a bit of trivia for you Etsy folks out there. Did you know that the majority of shops use Papyrus font for their shop banner? I didn't believe it, so I started looking. Then I suddenly realized, even my shop banner is in Papyrus!

(Note to self: change shop banner.)