Posted by Contrariwise at 6:19 AM

A good friend of mine told me about a jewelry designer she knew in Minnesota. She' d purchased quite a few pieces for herself and for gifts, but he'd retired a while back and she never found anyone whose work she liked as much.

Her favorite earrings were ones he had made. But unfortunately she'd lost one of them at the gym. (Don't you hate when that happens!) She was so disappointed, that a year later she was still checking the Lost And found for it.
When she told me this story, I asked to see the sad solitary earring. Who knows, maybe I could make a replacement or maybe I could find someone who could. (Hey, it was a longshot, but I'm an optimist!) 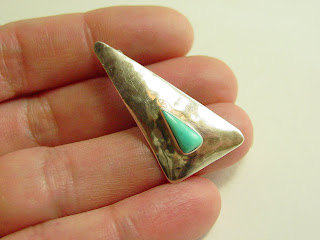 When she showed it to me, I realized it couldn't be that difficult to duplicate - for someone who had access to turquoise, silver sheet, saws, and knew how to hammer and solder!
But I did know someone who did! The instructor at the class I just took in making cabachon pendants! And he'd also mentioned he had a ton of turquoise he'd purchased decades ago.
I'd already signed up for a second class with him - one on how to make rings. I brought the earring to that class and asked him if he'd consider taking a commission to make a matching one. "Sure", he said. "I could make it. But how about if YOU do it. "
Huh? Me?!
Not what I had expected, but it sounded like fun. We agreed that he would help me try to duplicate the earring. He had turquoise and all the equipment at his house, and I would call him and arrange the time.

He's about 75, retired, and a real character. It would be really entertaining but I couldn't help being a little wary - you know how it is.

I went back and told my friend about it and made the following arrangement: she would pay for the costs for the materials and whatever the instructor would charge. I wouldn't charge her anything, BUT she would have to come with me.

She agreed! And I planned to call him the next day to arrange the date and time.


(If you'd be interesting in subscribing to my blog and receiving it by e-mail, just click Subscribe to Contrariwise ramblings by Email.)