Posted by Contrariwise at 7:54 AM

I just took my first jewelry class the other week. It was a silversmithing course to make a silver pendant with a stone.

It was SO MUCH FUN! Lookie at what I made! 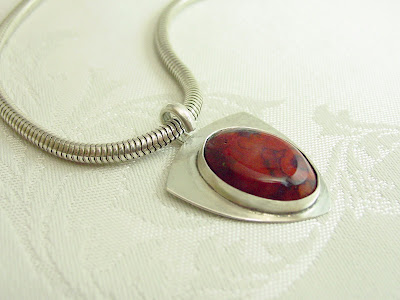 I bezel-set the stone, using a propane torch to solder it to the sterling back, which I cut freehand, using a pair of scissors.

The teacher is a former silversmithing teacher at a local university who knows a great deal about how to use inexpensive techniques. He told us stories of using an coffee can, some foil and an old skillet to do some fancy work. He's quite a character, let me tell you.

I had brought a stone that I wanted to set as a pendant, but the instructor didn't think it would be the best for the project - the back of it wasn't flat. But he had brought a bunch of stones that he cut and polished himself for us to pick from. So I went through his pile and finally settled this red one that you see above.

I asked him what kind of stone it was.

He looked at the stone. Then he looked at me. The he gave out a long drawn out sigh and coughed a few time.

After he got everyone's attention it was time for a story.

It seems that he had been out in Arizona a while ago, looking for fossils to bring back as specimans for his classroom.

One of his old friends had a dinosaur on his property that he had been digging out for quite a while. As the story goes, it was a raptor, and whatever had killed it, must have scared it sh%tless because there was a big pile of dinosaur poo at the base of his tale.

Well he dug up this prize speciman and displayed it in his classroom for a number of years. He also cut and polished chunks of it.

Yes, ladies and gentlemen, my pendant is fosilized dinosaur crap.