Posted by Contrariwise at 9:49 PM

I spent most of Thursday in transit. I got up at 4:30 AM to catch a cab to Denver airport. I was supposed to have a 3 hour layover in Detroit (again!) but when I got there, I found that there was a flight leaving for Indianapolis in 30 minutes. They had seats, so I was able to get on it - this meant I could be home more than 2 hours early! It wasn't until I had entered the plane that I realized that my luggage wouldn't get to Indy as quickly as I would.

Sigh. No luggage for me. At least I got home early. But I won't be able to pick it up till Saturday. Hey, who needs make up and a curling iron anyway!

So, this preamble has been an excuse for why I didn't post my Day 9 design yesterday. (Cue the violins.) I was just too tired to do much of anythign last night. I vegitated and spent some time cuddling with my daughter and watching TV.

But I'm really really pleased with this design for Day 9. It's deceptively simple: a single piece of silver and a round gemstone. BUT, I think that simple is hard to get right. 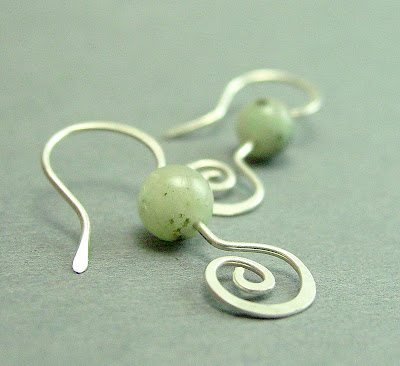 Yes, it's just a single piece of wire, but it flows well with the stones and has a graceful curving design. And hammering the wire in different areas of the wire gives the earrings depth. 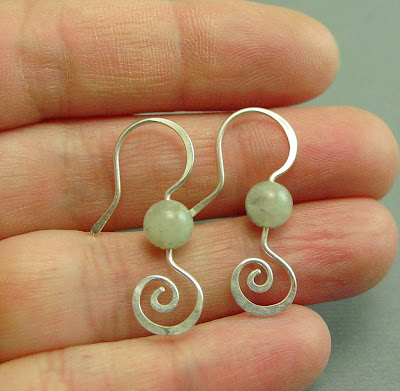 (Only problem: I can't remember what the heck these stones are! Does anyone know?)