Posted by Contrariwise at 2:33 PM 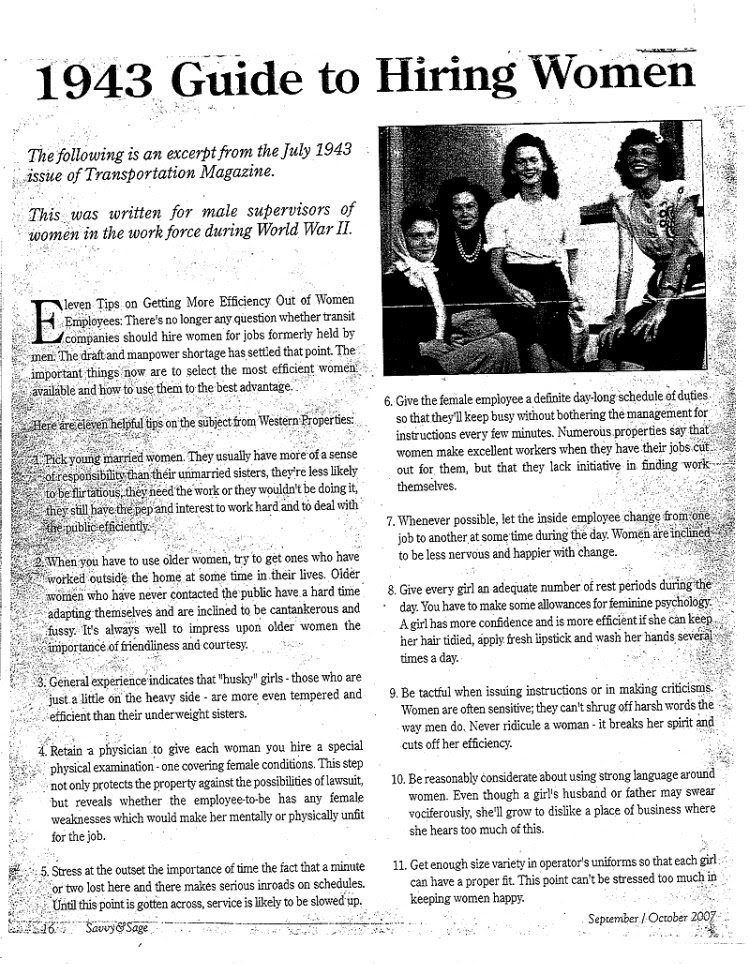 If you can't read the above, here's the text:
1943 Guide to Hiring Women
The following is an excerpt from the July 1943 issue of Transportation Magazine. This was written for male supervisors of women in the work force during World War II.

"Eleven Tips on Getting More Efficiency Out of Women Employees: There's no longer any question whether transit companies should hire women for jobs formerly held by men. The draft and manpower shortage has settled that point. The important things now are to select the most efficient women available and how to use them to the best advantage.

Here are eleven helpful tips on the subject from Western Properties:

1. Pick young married women. They usually have more of a sense of responsibility than their unmarried sisters, they're less likely to be flirtatious, they need the work or they wouldn't be doing it, they still have the pep and interest to work hard and to deal with the public efficiently.

2. When you have to use older women, try to get ones who have worked outside the home at some time in their lives. Older women who have never contacted the public have a hard time adapting themselves and are inclined to be cantankerous and fussy. It's always well to impress upon older women the importance of friendliness and courtesy.

3. General experience indicates that "husky" girls - those who are just a little on the heavy side - are more even tempered and efficient than their underweight sisters.

4. Retain a physician to give each woman you hire a special physical examination - one covering female conditions. This step not only protects the property against the possibilities of lawsuit, but reveals whether the employee-to-be has any female weaknesses which would make her mentally or physically unfit for the job.

5. Stress at the outset the importance of time the fact that a minute or two lost here and there makes serious inroads on schedules. Until this point is gotten across, service is likely to be slowed up.

6. Give the female employee a definite day-long schedule of duties so that they'll keep busy without bothering the management for instructions every few minutes. Numerous properties say that women make excellent workers when they have their jobs cut out for them, but that they lack initiative in finding work themselves.

7. Whenever possible, let the inside employee change from one job to another at some time during the day. Women are inclined to be less nervous and happier with change.

8. Give every girl an adequate number of rest periods during the day. You have to make some allowances for feminine psychology. A girl has more confidence and is more efficient if she can keep her hair tidied, apply fresh lipstick and wash her hands several times a day.

9. Be tactful when issuing instructions or in making criticisms. Women are often sensitive; they can't shrug off harsh words the way men do. Never ridicule a woman - it breaks her spirit and cuts off her efficiency.

10. Be reasonably considerate about using strong language around women. Even though a girl's husband or father may swear vociferously, she'll grow to dislike a place of business where she hears too much of this.

11. Get enough size variety in operator's uniforms so that each girl can have a proper fit. This point can't be stressed too much in keeping women happy."