I just received a late Christmas present from a friend of mine: 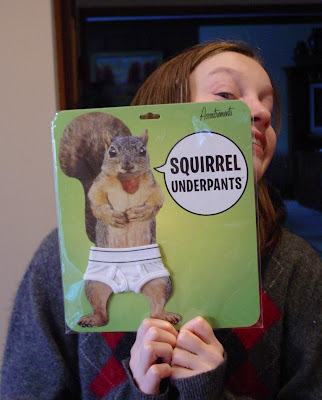 If you are tired of nasty little squirrels flaunting their nuts in your backyard, or having to hide your children's eyes every time one of the furry little buggers streaks across your yard, then this is the gift for you!

(I am absolutely sure that next Christmas's recipient of this marvelous gift will appreciate it as much as I did.)

I opened the plastic and found the squirrel underpants to be quite small. Size XXXXS appears to correspond to a 3 inch waist measurement.

Disappointingly, there was no opening for the tail.

Nonetheless, only one question went through my mind when I opened the package of Squirrel Underpants: Would they fit MooShu?

Unfortunately, due to the numerous treats that tended to fall onto our kitchen floor over the holidays, MooShu has gained some weight and is now tipping the scales at a rotund 4 lbs. So it was possible - even likely! - that the Squirrel Underpants might not fit his once-svelte body.

When they were dangled in front of him, the tighty-whities appeared to intimidate MooShu and we had to chase him around the house for a while before we were able to capture him.

Once captured, even after sniffing the underwear (probably to assure himself that they had not been previously worn), he remained unimpressed and did not want to put them on.

We, however, pressed him and eventually got the squirrel underpants on him.

And here is a photo of MooShu wearing the Squirrel Underpants: 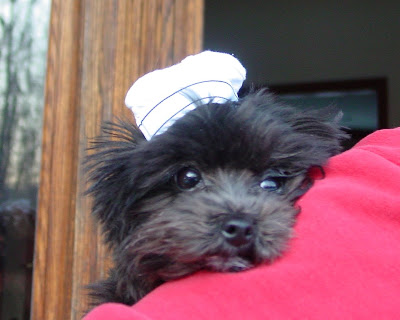 Would you like to be a Contrariwise (or MooShu) follower? All you have to do is click on the link in my side bar on the left.