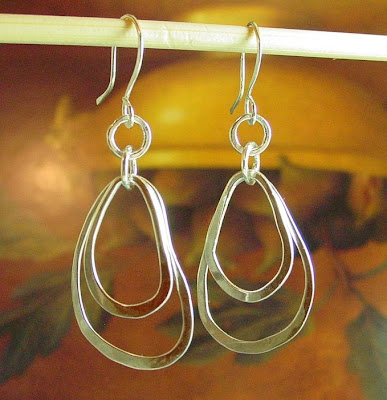 I've recently learned to solder. While my early attempts were making bezel-set rings, lately I've been going to simpler things: hoops and circles.

Just making simple rings from wire, soldering them to make perfect circles (more or less), then hammering them to the desired shape can be so gratifying.

I've had a number of designs in my head. Not content to go with simple circles, I wanted to make them a bit more...organic. So I was thinking about graceful curves, hammered to bring out a dimensional look.

Plus I wanted them to be substantial. So I decided to be daring and pulled out my 14 gauge sterling wire. It has a lot of heft. Yes, perfect.

I made one large and one smaller circle. Soldered them, formed them freehand and hammered them. Then hung them on handmade links.

You can see them above. Notice I left the tops of the hoops unhammered, but flattened the bottoms to create some dimension.

As with all new designs, I had to wear them - let's call it quality control. Sometimes new pieces have quirks that need to be modified before they can be considered ready to be sold. 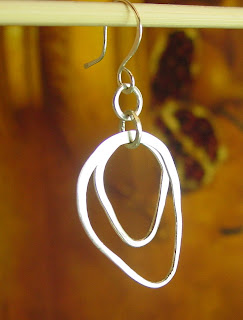 So I wore them -- to a roller skating rink.

While there, I found that they had an annoying little habit - they didn't want to stay in position! Instead, they tended to flip around to this:

Why did they do that?

I think it's because the flattened areas (which I wanted to hang down) tended to weigh slightly less than the unhammered tops. So when I moved around, gravity made them shift.

Sigh. What to do?

I thought about a number of fixes:
Solder the rings together and solder a jump ring to the top. (But I would lose the movement I wanted in these earrings.)

Tie them up on the top with wire. (I didn't think this would look good.)

Drill a hole at the tops of the hoops and put a jump ring through it. (Maybe. But the hole would have to be pretty small and so would the wire for the jump ring. OR I would have to hammer the tops, which would make them lose the dimensional effect I wanted.)

I spent a couple of weeks thinking about it until I came to a solution.


TO BE CONTINUED.
Tomorrow: the solution.