I've been running my rock tumbler almost non-stop for the past several weeks because of the Christmas rush in jewelry orders. It's used as a final step to polish my silver jewelry. In the past year, I've probably probably been running it about 48+ hours a week.

I first noticed that it's a bit sticky where the plastic meets the O-ring. Then it started hiccuping.
I finally came to the conclusion that the O-ring is shot PLUS there's wear where parts meet.

The O-ring isn't anything you could easily find at Lowe's. I suppose I might be able to find it on the internet. But, since I only paid $3 for this tumbler, I thought it might be time to upgrade to a better model.

So, in honor of my tumbler's faithful service for the past year, I'm re-running one of my favorite posts from last year:

A while back while I was out on a garage sale run , I found a toy rock tumbler -the kind that you can buy at Michaels Craft Stores - for only $3.00. 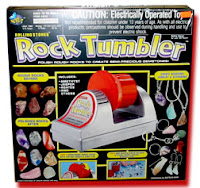 It didn't look too bad. According to the seller, the tumbler was never used, however the little rocks and grit were missing. But, all in all, not a bad deal. I thought my 10 year old would like to try it or maybe I could use it for something.

Well a couple years passed and the tumbler collected dust in the front closet.

I'd always heard that tumblers are great for silver jewelry. They supposedly shine silver up and harden it. Since I make a lot of silver jewelry, it sounded like it might be worth a shot!

Next step: find out what I need to know about tumbling silver jewelry.

Google, of course comes in handy. I found this site that tells you just about everything you need to know about tumbling silver: http://urbanmaille.com/articles.asp?id=148 Armed with the information, I am ready to begin.

First. I already have a tumbler. (So what if it's plastic! No snickering!) It looks simple enough and seems to work all right without anything in it..

Next, I need to get some steel shot - probably about a pound worth. After checking some sites, I realize that I will be paying more for my steel shot to FILL the tumbler, than I PAID for the tumbler itself. Plus there's a shipping fee for mailing a whole pound of stainless steel shot across state borders. This is getting expensive. 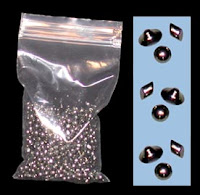 I guess it must be dirty because the directions say that I'm supposed wash it before I use it with jewelry.

Well, I have a colander. I checked the holes and decided that the shot PROBABLY wouldn't go through them. But...wait a minute... using a colander would mean I would have to put it and my steel shot in my sink and run water over them. Not a good idea. I don't want any steel shot going down my sink and into my garbage disposal!

What else? Let's see, I have some stainless steel mixing bowls. I can fill one up with soapy water, put the steel shot in it and swish it around. The shot could be washed on my counter top and not on the sink.

So I got my bowl, put some warm water in it, and placed it around five feet away from my sink. I opened up my steel shot and started pouring it carefully in the water. Well, those steel shot are pretty heavy, and they seemed to gather some speed while I was pouring them in. All of a sudden -SWOOSH!

Do you know what happens when steel shot hit a steel mixing bowl. They start bouncing. About 5 of them bounce out of the bowl, and wouldn't you know those suckers bounced right across the counter top straight for my sink, with me scrambling after them and trying to catch them before they reached it.

I managed to catch two.

You KNOW where the others went. 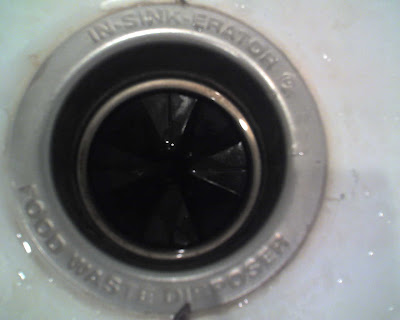 Yes, they're down there.
No, I can't get them out.
Yes, I have to tell my husband something.

The plumber was called the next day. I was lucky. The house call only cost $120 because we didn't need a new garbage disposal. That would have been at least another $150 more.

Rock Tumbler: $3
Steel Shot for said tumbler: $24
Plumbing bill for steel shot in disposal: $120
Look on my husband's face when the plumber handed him what was stuck in the disposal: priceless.