Things that amuse me: faux sushi

Posted by Contrariwise at 9:20 AM

I really like sushi. At least I like "American" sushi. You know, things like Tuna Rolls and California Rolls or whatever. With a little wasabi - just enough for some bite but not enough to clear your sinuses - it's great.

I've been to Japan twice on business. Let me start by telling you, sushi in Japan is not the same as sushi in America. Inocuous-looking nigiri can end up coating your mouth with an amazing slimey-smooth mouthfeel that you've never experienced before-- and that lasts for way, way too long.


You end up eat stuff that you've never had before and you have no idea what it is. Unless you're in a restaurant sitting next to a Japanese techie- geek who knows no English but does have a Japanese-English electronic translator, like I did once.

What an opportunity to satisfy my morbid curiosity! I picked up each piece of food with my chopsticks and asked him what it was. Some were somewhat familiar. Some didn't translate well into English. Others were rather, shall we say...interesting. For example, a round grey blob turned out to be octopus brain with octopus eggs. Whether it was really octopus brain or whether these cephalopods really stored their eggs in their heads didn't really matter. Whatever it really was, it was probably something I didn't want to attempt to chew. I deftly placed that morsel to the side of my plate.


Of course that didn't stop me from waiting until one of my American colleagues was chewing on the grey blog to announce what it was.

You know, I just live for moments like that.

Anyway, I'm rambling. (Note the name of this blog.) What I really meant to talk about was faux sushi. For some reason, sushi seems to be a great thing to replicate in various (inedible) forms. I don't know why this is, but it's pretty amusing.

Yarnbeast (http://www.yarnbeast.etsy.com/) has reinterpreted the plastic sushi magnet using her own personal artistic medium, yarn. I would never have guessed that you could knit sushi: 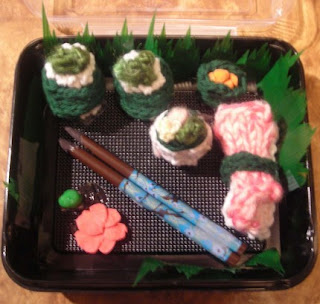 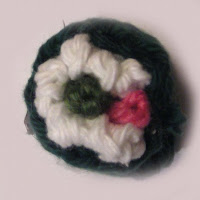 "5 piece sushi magnet set served on a decorative plate with bonus wasabi, chop sticks and pickled ginger magnets. The set is wrapped in green plastic wrap and a perfect gift for any sushi lover! The pieces are 2 avacado and cucumber rolls, one California roll, one crab sushi and one salmon roe roll. " 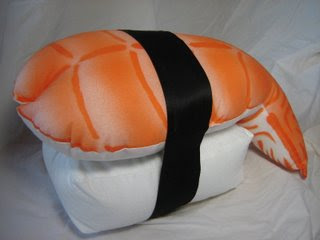 For those who like a Japanese theme in their furnishings, what could be more fun than having your own oversized shrimp nigiri pillow?

This is brought to you by The Original Sushi Pillow (tm) (http://www.sushipillow.etsy.com/). The shrimp pattern is handpainted onto a cotton/polyester mix and a subtle rice pattern can be found on the cotton rice pillow. Black/green crinkle taffeta imitates the nori wrap perfectly! 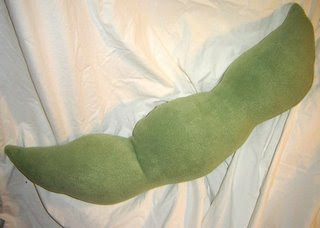 While this isn't sushi, edamame is a wonderful accompament to sushi, and looks really cute as a pillow too. It measures about 36" long and 8" wide, so it could be used for a sofa or bed pillow, and is made with fiberfill. (Sorry, there are no removable beans.)


Oh, one last note. The Japanese also like salad. But you need to be wary if your salad has little crunchy bits on top that resemble Durkee's Fried Onions. Look closely, because each tiny cruchy bit may have two teeny tiny eyes staring back at you.