Things that amuse me: Urban Fairies

Posted by Contrariwise at 6:05 PM

Fairy doors are popping up around Ann Arbor, Michigan. No one knows who's building them. They just mysteriously appear. The entryways are Thumbelina small and are so subtle and incongruent that they're easy to overlook -- or dismiss. At first glance, you might mistake one for an electric socket or a mismatched brick. But look closely and you'll see evidence that, yes indeed, something very little could be living there. Are they appearing there because they're being displaced from their rural homes by urban sprawl? Perhaps.

Here's only one of the examples of Fairy Doors in Ann Arbor. It can be found at the Sweetwater Coffe Shop: 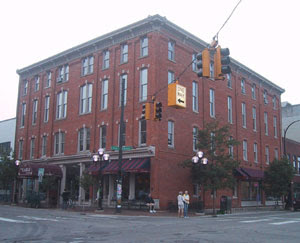 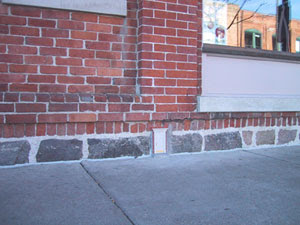 You can see it's quite small: 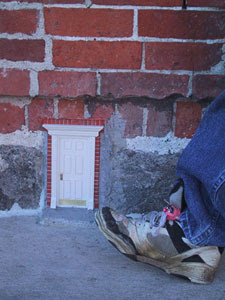 And from the inside of the shop, it looks like the fairies are getting quite comfortable: 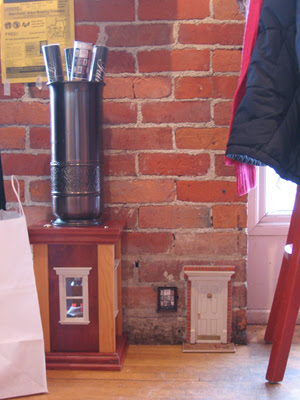 Because Urban Fairies are as fickle as any Woodland or Flower Fairy,the locations change with whims. At any given time, there may ormay NOT be a door when you look. 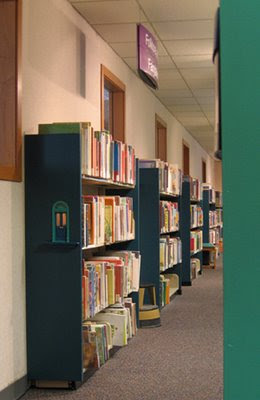 One of the most amazing examples can be found in the children's section of the Ann Arbor library.


Fairies have taken root here! The urban fairy library door is a teal colored double door in the end of a book case of fairy tales. 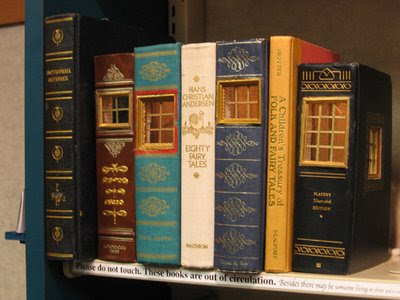 Not only a double door, but windows in several of the books. The shelf sign reads: "Please do not touch. These books are out of circulation. Besides there may be someone living in them and it would be rude to disturb them. " 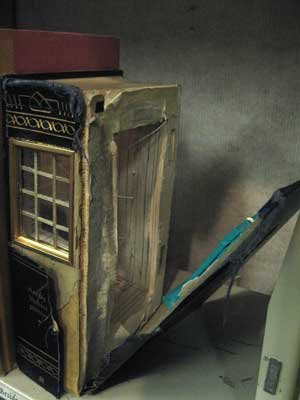 Although the sign requested people not to touch, it apparently was difficult to comply with! Some of the damage has been repaired. Unfortunately, who knows how likely it will be that the fairies will return!
In hopes that they will return. children are leaving gifts for the fairies: pennies, candy, hand-knit socks made with tiny needles, teeny felt hats and fairy-sized coloring books. These gifts are referred to as "fairy droppings".

These doors seem to appear overnight. But how can one get a fairy door of their own? This question does not have a simple answer...at least not one that I can give. There ARE people and companies that make and sell "fairy doors. Some handy people have made their own...in hopes of enticing fairies to come visit. A couple of them can be found on Etsy.
Amongst my favorites, are those made by WeeFolksOutfitters. 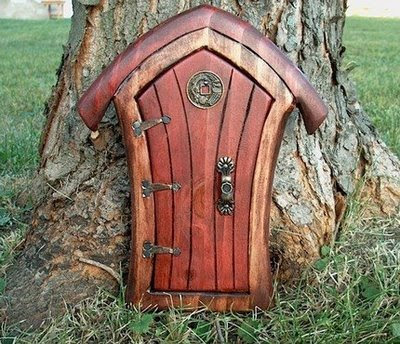 Here is on of his Fairy/Faerie Doors (Also suitable for Elves, Gnomes, Sprites and other Wee Folk)

"Have homeless fairies been bouncing off your windows? Are sad little gnomes milling about your garden and sleeping under leaves? Do you find passed out pixies in your mailbox?Don't just sit there saying "oh, the poor wee things"...Be a part of the solution!All you have to do is install one (or several) of my fairy doors around your abode (and yes, you do have to buy them first -- this 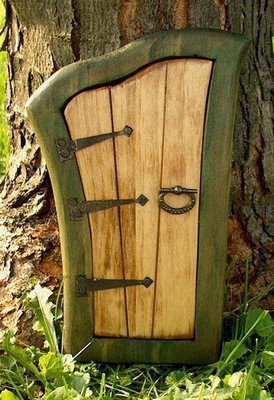 isn't "Habitat for Supernatural Beings"). You can put them in your garden, mount them on the side of your house, put them on a bookshelf, lean them against a tree or stump or big stone and "voila!"... an instant home for the wee folk!I make what have been called the "finest" fairy doors on the Intarwebs. They've also been called "magnificent", "cute", "adorable" and other nice things. Unfortunately, the artist (me) hasn't -- but then I'm just an overfed long-haired leaping gnome known to spill wine.All of my doors are constructed of solid knotty pine (unless otherwise noted) and each one has a personality of its own. I also sign and date each one on the back. The door and door frame are separate pieces of wood. Very important detail... THE DOOR DOES NOT OPEN -- at least not by human hands."

I have already found a tree that I think would be perfect for a door. Who knows, perhaps someone might move in.
These and other fairy doors can be found at http://www.weefolkoutfitters.etsy.com/

Labels: Etsy, things that amuse me