Posted by Contrariwise at 1:28 PM 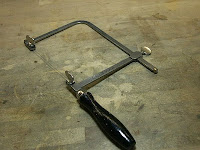 For the longest time, I feared the jewelry saw and I avoided using one. But it you want to do metalwork, you're eventually going to need to saw some metal!

My first feeble attempts at sawing resulted in many broken saw blades. Even trying to saw out a simple figure was difficult. My circles were misshappen, my ovals were eggshaped, and my squares turned out as quadrilaterals.

So I decided that if I couldn't make a simple geometric shape, I better try something different. 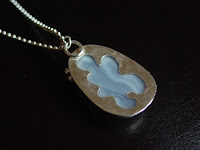 Fluid forms might not be too bad - I could disguise the fact that I couldn't cut a straight line. And they're pretty interesting and make the back of a pendant seem a little bit different.

So I started cutting out wavy patterns on the backs of my pendants. After a while this got easier and I began to break fewer saw blades. 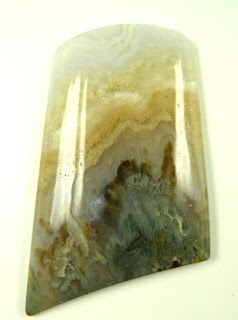 The other day, I bought the cabochon you see on the right. To me, the pattern of the stone looks like trees on a mountainside, with misty hills in the background. I planned to bezel-set this stone in a pendant, and as I soldering the bezel in place, I suddenly got an idea: I would saw out the back of the bezel in the shape of a leaf!

For someone who'd never sawed anything more intricate than some rounded shapes, that was a pretty daring idea.

So I took my sharpie, drew a leaf, chose my blades, and began sawing away.

And this is what I got: 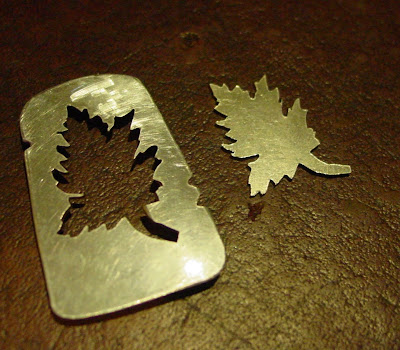 Let me tell you, I learned a lot by just doing this and I've gotten pretty comfortable with my jeweler's saw.

The pendant is still a work in progress but I promise to post some pics when it's finally done.

Would you like to be a Contrariwise follower? All you have to do is click on the link in the upper right on my side bar.