Posted by Contrariwise at 11:35 AM
The first thing I do every morning is let the dogs out. But last Monday I awoke to find a light snowfall on the ground. This meant that MooShu was going to have his first encounter with snow!
I opened the door and the dogs ran out, full speed. As soon as Mooshu's front paws hit the snow they did a quick stop -- but his back end kept going - up, up, up, went his little bottom until he almost did a front flip.
It took a while to show him that the snow wasn't all that scary. Although I don't think he was all that convinced.

Eventually, he began exploring and found the snow quite tasty! 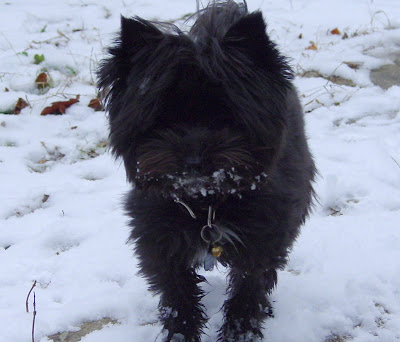 This was barely a dusting and it went up to his knees! I don't know what he's going to do in the first real snow.

Would you like to be a Contrariwise (or MooShu) follower? All you have to do is click on the link in the upper right on my side bar.