Posted by Contrariwise at 4:33 PM 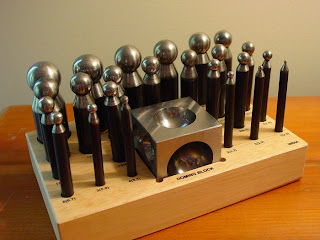 But both are so expensive. Not only are these items pretty pricey, but shipping is really expensive because, being made from solid metal, they're very heavy. But I was itching to try this technique but wasn't sure that I'd use it a lot.
So I really didn't want to invest a lot of money.
The least expensive dapping block I could find was at Harbor Freight at $35. When it went on sale for $22.99 I snapped it up. (There it is on the left.)
It went home with me. I'll admit, it's not the best quality. I got what I paid for. There are minor scratches in the hollows on the block, and a couple of punches have slightly flattened tips.

BUT IT LOOKED SO COOL ON MY SHELF! And it works very well.

Next step was to find a disc cutter. 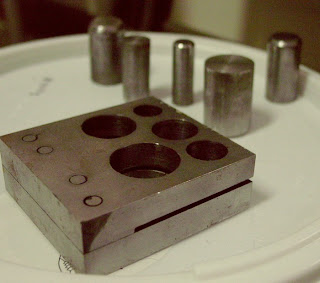 I heard that the best ones were made by Pepe. But for some reason, they were unavailable and back ordered everywhere .. PLUS I balked at the price. They were really expensive. Instead, I opted for a relatively inexpensive disc cutter on eBay. (There it is on the right.)

I was pretty happy at first, but it didn't last for long. After the first 6 or so punches, it wasn't cutting very well. Every disc had to be trimmed and filed. I started hating using it. In fact, I started to avoid using it. And after a very short period of time, it started to rust. 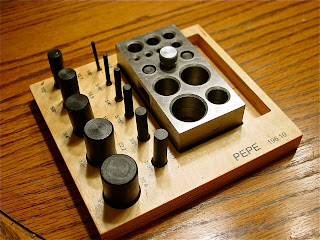 Not too long ago I noticed that the Pepe disc cutters were in stock again. So I decided to spend the bucks and buy one. And if I was going to spend the bucks, I decided to pay a bit more and buy the big monster set with every punch size - even though I had no idea of what I was going to make with the teeny tiny punches the set has.
And on the left is was recently arrived on my doorstep.
Wow. What a difference. Each time I use it, I get perfect discs. No trimming necessary. Considering the time I used to spend trimming the discs and filing them, I'm saving money.
I've been happily making discs of all sizes and playing with them. And even though I never 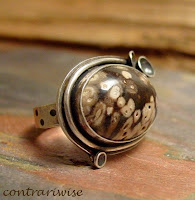 thought I would use the smallest punches, I've found them to be so much fun to make and incorporate in my jewelry. They make great accents to cabochons and I've got some ideas about earrings.

I'll just need some time to make them.

Would you like to be a Contrariwise (or MooShu) follower? All you have to do is click on the link in the upper right on my side bar.