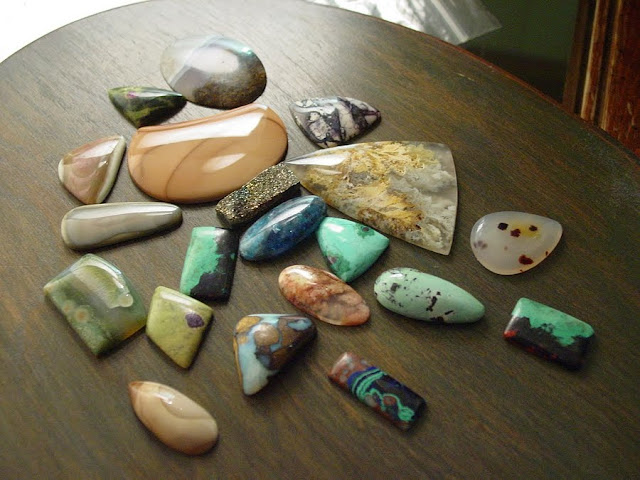 The Bloomington Gem, Mineral, & Fossil Show was HUGE.  3 buildings in the fairgrounds and overflow dealers outside.   I couldn't believe how big it was - but cab sellers were the minority. Tons of people were selling rock slabs and huge amounts of chunks of rock. Despite that, I think I did pretty well.

The only person I met from Etsy that I knew was GemCutter.  It was like meeting an old friend.  I got a chance to see his cabs in person and preview some that he'll have in his Etsy shop later this week. A few of the ones he was going to list went home with me.  (Do you see that huge plume agate and the large Bruno Jasper.  Sorry, they're never going to get listed in his shop as they're mine!)

I thought I bought quite a lot of cabs, but when I laid them out to photograph, it doesn't seem to look like much.  As you can see in the photo I  got some Atlantiscite, plume agates, bruno jasper, imperial jasper, turquoise, a boulder opal, and a bunch of other stuff.  (If you want to see individual photos of the cabs, go to my flickr site. )

It's so nice being able to see the cabs rather than buying them on line.  They look so different in person and you really know what you're getting.  I bought a couple new types that I'd never seen in person, the bruno jasper and the imperial jasper.  I'd never been impressed when I'd seen photos of them.  They looked pretty boring in photos so I never bought them.  But when I saw them in person - WOW!  Especially the Imperial Jasper - it has an amazing inner glow that is so difficult to capture.

It was hotter than heck and I was so exhausted when I got back home. ( I have no idea how the sellers can do it.)  But I'm already planning to go again next year.