Posted by Contrariwise at 10:35 AM

Ostriches are clever and hard to catch. They run very fast and their kick is strong enough to kill a man or even a horse. It was hard for early people to catch ostriches, but their eggs were more available. They are about the size of 40 chicken eggs. To steal one from an ostrich nest, just throw a rock into the weeds. Ostriches are curious and will leave the nest to see what is going on. And what a steal! I have not eaten an ostrich omelet, but many people say they are very tasty. If you empty the egg from a hole you can use the shell to hold water (before people had bottles or pots). And when the eggshell breaks, you can make beads from them.

The pic on the left is of individual ostrich eggshell beads. The way that they are made is that the egg shell is broken into shards and smaller pieces are broken from the shards. The small pieces are made more or less round by tapping them with a piece of horn or metal. A stone is used as an anvil. A hole is drilled through the centre of the beads with an awl and they are then strung onto a rolled sinew thread (or plastic these days) until they fit tight against each other. They are then ground along a stone to smooth them on the edge. (See picture on the right.) Sometimes for color, beads might be roasted in a fire or dyed using natural dyes.
Some of the oldest beads in Africa are of ostrich eggshell. They have been dated to 37,000 to 39,900 years ago. I've also seen an article from Science magazine that claimed that ostrich shell beads found in Tanzania may be more than 110,000 years old.
So what can you make out of these beads? I've had a strand for a while (I also collect old African trade beads and vintage beads - something I'll probably blog about on another day) and couldn't decide what to do with them. I put together a necklace using them together with some old eye-beads and turquoise. But it just didn't work out like I wanted to, so I put it away for about a year. Recently I took another look at it and decided to salvage it and make some earrings. 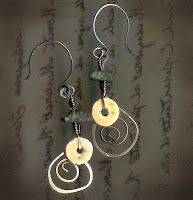 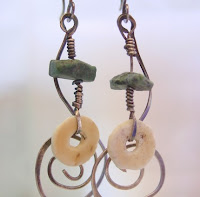 Here's a couple of pics of how they turned out. I think they have a tribal look to them ..or maybe an organic look. Anyway, they're pretty unusual.