The Groundhog in my pool

Posted by Contrariwise at 5:56 PM 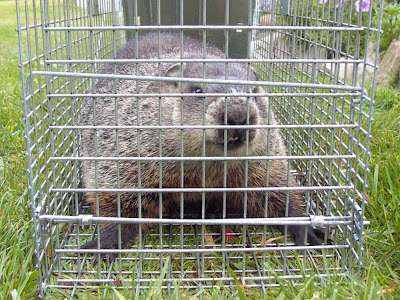 The man from animal control came over our house with a trap and a plan to capture the groundhog living in our pool cover mechanism. Once he got him, he was going to take him far far away to a field with plenty of tasty dandelions for him to munch on.

So he went and unscrewed the metal plate from over our pool cover and found.....
....absolutely nothing. No trace of the groundhog. No nest. No nothing.

So the above picture above is NOT my groundhog. It's just a picture I found on the internet. My groundhog is somewhere in the woods behind my house, frolicking amongst the ferns.

The man from animal control left empty handed (or empty crated). But not before charging us $130 for about 20 minutes of work.

It was a very expensive groundhog.